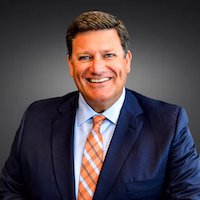 As those who have served our country know, being in the military is all about teamwork. Since graduating from the Naval Academy in 1986 and then launching a career in the financial services industry, Jim has been passionate about the value of teaming with others to achieve common goals through building strong relationships.

After 22 successful years with Creative Financial Group, Jim joined Penn Mutual in 2011 as Managing Partner of 1847Financial, based in Conshohocken, PA. He has since received recognition for several outstanding achievements, including the GAMA International Management Award and the prestigious Penn Mutual Chairman’s Award. Under Jim’s leadership, 1847Financial is continually recognized as one of the Best Places to Work in PA. Jim has also been featured in The Wall Street Journal, ThinkAdvisor, Forbes, Fortune, Bloomberg, and RIA Central Advisor Newsletter.

Currently, Jim serves as the Chairman of the the Board of The American College. He is also Chair of The American College Center for Veterans Affairs, which partners with Penn Mutual to award scholarships to military veterans and their spouses interested in pursuing a career in the insurance and financial services industry.

In 2008, Jim earned a Master of Science in Management (MSM) degree from The American College. He continues to be an advocate of the College and their efforts to partner with veterans. 1847Financial also actively supports area charities, including Believe and Achieve, a foundation that provides access to basic needs for at-risk youth in local neighborhoods. In addition, Jim is a member of the Naval Academy Alumni Association, The Philadelphia Union League, Overbrook Golf Club, the Association for Advanced Life Underwriting (AALU) and the General Agents and Managers Association (GAMA).